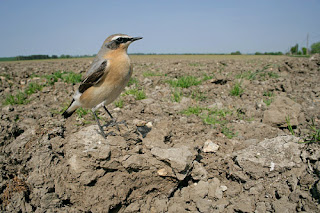 I have for ages wanted a better method of supporting a camera at low level, the equipment that is available seems only to be in the USA, or very expensive, but I have had the idea of using a frying pan for ages. The major problem was finding one that would work in the way I wanted, most have ridges either turned or cast on the bottom of the pan and I felt they would not slide on the ground too well, however ASDA came to my rescue, a nice cheap pan in their sale for £12-99.

I had to turn up a solid mounting to suit a ball head and my Wimberly head, this was a 100mm diameter billet of Aluminium about 50mm high, through the middle I cut a 3/8" Whitworth thread, and turned it on a lathe to a top-hat shape, the main body being 50mm diameter and 40mm long then there was a 100mm diameter section that was 10mm making the "brim" of the top-hat, around this I drilled 3 holes 6mm diameter at equal spacing that I could use to enable it to be bolted onto the pan, I used silicone bath sealer to make the joint water tight too.

The main use of this will be for photographing waders etc, the idea being that with the pan being sealed I can use it to put spare batteries and memory cards in whilst I crawl about in the mud. It is I should add very effective for waders. 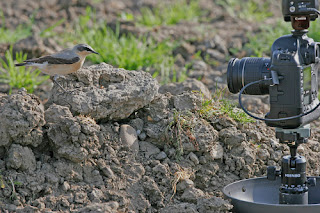 As you can see in this shot it is very useful and easy to set-up, this Wheatear became very tame after being fed on mealworms, the Frypod made it very simple to change the camera position as the sun moved around.

Although I removed the pan handle, I now think it would have been best left on, as it might be easier to move the set-up about when using longer lenses for stalking birds when laying/crawling on the ground. 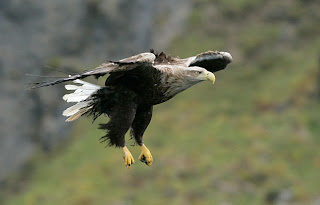 OK after much deliberating I have taken the plunge and started a blog spot, hopefully it will be of interest to you. I am a full-time professional wildlife and nature photographer based in the UK.
The picture above should get the ball rolling, This is a White tailed Sea Eagle photographed in Scotland, I have been up there for a few weeks since the tail-end of May.
I love Scotland it is a beautiful place with stunning scenery, fabulous birds etc, but Scotland it would appear hates me, now usually this just really means that however good the forecast is, by the time I get there it is raining, dull and murky, but this year Scotland was out to bite me in the bum, and for good measure it had grown sharp fangs.
I should have seen the warnings to start with when my departure was delayed...I'll explain....
A nice new high speed 8 Gig memory card arrived and when I checked it in the camera it was fine, the PC however wanted to take 55 minutes to extract 20 images from it, not good, quick chat with the bloke at the shop and a replacement was on the way for the next morning and the dud one was winging its way back. So instead of driving to Bonnie Haggisland overnight, it would have to wait until the postman had been next day, great no problem.
A good nights sleep would actually be wise before the drive, and I can get one of the camera batteries topped up and the small load of washing that's reclining on the bedroom floor done overnight too. Bright and early the postman called, new CF card great, batteries full fabbo! ......washing machine bleeping and full of water and the twee little LCD screen suggesting I refer to the manual, Bol-locks!!
"Yeah mate I can fix it Friday", "Nah earliest slot I've got, mid morning" the next day but one, oh well.. this triggered a hasty reshuffle of plans, easy; phone the accountant and get all the business paperwork done and signed before I head north, then I don't need to get back for at least 3 weeks problem sorted.
Thursday I get to the accountants, sign here, sign there, and here, and write out big cheque for the government, all done and head home up the A1.
It was just after I had thought "no calls on the mobile that's odd" and then realised that I had left it at home, when the car died, hazards on and coast over to the hard shoulder, now what! well I did have a bit of luck because a friend of mine came along a few minutes after I stopped, he had his mobile, soon a tow truck was on its way.
" Ignition module mate, nah 'bout an hour to fit, 'undred forty quid, yeah lunch time tomorrow no problem", 3 hours later I'm back home.
Friday, just as I shell out £65 for the fixed washing machine the garage calls " sorry guv can't get the part 'til Monday!" I temporarily had an attack of Tourettes syndrome.

Everything done, car running sweet, I finally headed off on Monday lunchtime.
White Tailed Sea Eagle, ace bird, easy to photograph, chuck them a fish and they fly right down to the boat...........
Three whole days I sat bobbing up and down on the swell. They were there, I could see them hunched up in the shadows, just visible through the drizzle, "you should have been here last week" the skipper cheerily repeated, "fantastic weather", well it did finally come down as you can see.
As I headed to Lochmaddy, North Uist, on the ferry I reflected on how fortunate that the events of the previous week had occurred when they did, the car problems would have been so much more of a pain on these Hebridean islands, so as annoying as it had been, maybe just maybe it had been a stroke of luck.
Apart from the weather being garbage, and managing to jam the sump of the Ford Focus on a milestone hidden in the grass, it needed a local farmers tractor to tow me off, it was a successful trip...... well that's if I don't count the 2 speed camera tickets!
Posted by Nigel Blake at 18:21 5 comments: