The problem with Waxwings! 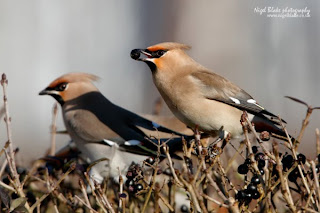 ……Is that they are just too popular and too addictive!
With this winter looking like it would produce a big irruption of the Scandinavian beauties from early on I was keen to be out photographing them, it’s not that I haven’t already got lots of shots from previous years but the chance of fresh images on higher (ever growing) resolution was the driving factor.
However I am addicted to these fantastic looking birds and any opportunity to photograph them is usually a real joy; this year though some of that pleasure has been ruined by a few morons.
Now I am a fairly tolerant person but this year I have had my patience stretched by the idiots that turn up where these birds are feeding, that’s birders and camera wavers too; I’ve avoided using the expression ‘Bird photographers’ here because in the main (with 2 exceptions) it is the dSLR owning public with no real interest or knowledge of birds, the new to birding camera owners with no fieldcraft skills or understanding of Waxwing (or any other species) feeding behaviour and the almost totalitarian hard-core anti-photography birders who are the problem!
In general the camera wavers are usually pretty good at taking some carefully worded and constructive criticism of what they are doing wrong, they then stop chasing the birds around, get a few shots they are happy with and move on. Its much the same with most of the others too, some think they know it all'
“I’ve been photographing birds nearly 10 years mate who the f*** do you think you are”
is a typical reply when they're asked to not chase about all over the place unnerving the birds.
Only last week I was stood still in the same place for several hours where I had a great shot lined up on a branch the birds regularly dropped down on, each time they appeared the same idiot ran over to where I was and poked his 100-400mm over my shoulder causing the Waxwings to fly off, the birds got more unsettled, he was not pleased when I finally lost my rag.
Not long after I had the Waxwings right where I wanted them, next to a busy road they were not bothered by the traffic and they were down in the same place for the fifth visit, I was happily getting some great images when 2 idiots screeched to halt, slammed the car doors, then the driver, shouting and swearing, accused me of spooking the birds by being too close. Clearly he had no ability to comprehend it was his own door slamming noise and sudden movement or perhaps the Waxwings usual 'hit and run' swoop, feed and back to a safe perch method of feeding was the cause of their departure.
I do not claim any priority rights over anyone else to look at or photograph birds, but I would like to see a return to some manners and respect for other birdwatchers, it doesn't take alot of common sense to see that a photographer/birder might have a bird performing well for great views or pictures (however common the species) why people can't stay back and leave others to enjoy the moment is beyond my comprehension.
I am nearly 56, I’ve been birding since I was 10, and photographing nature since I was 16, I love it, and until about 5 years ago I could go out and meet like minded people who loved it too, sadly that pleasure is being eroded by that small minority of overly loud and obviously selfish morons who seem to spoil birding for everyone… including themselves! 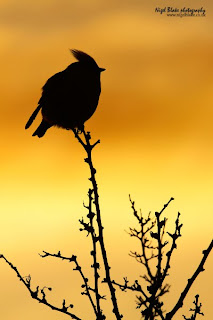 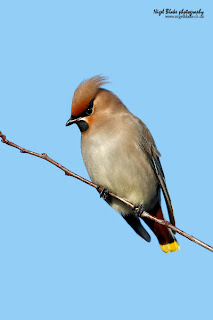 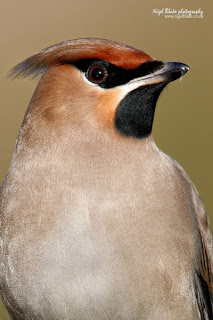 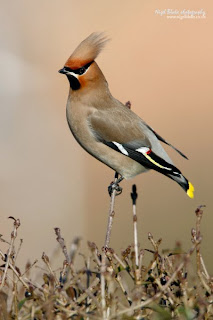 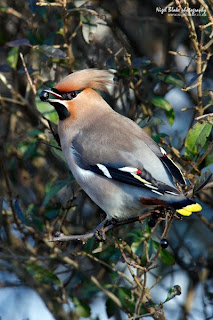 Well Nigel despite the morons turning up you still have some pretty good images. Big lenses attract morons and stupid questions and often spook the subject by turning up making a racket. I had a bittern in my sights the other day and had to tell a rather loud women to "shut it" Which she did but the ensuing tribe following her spooked it anyway. It is something we come accross from time to time and sods law, it is when your just about to nail a stunning shot.

Although video is not a new technology, with the new DSLRs it's no longer necessary to carry two lots of kit. But then you get the noisy ... (call 'em what you will) who make any sort of sound recording impossible. One very noisy brat (sorry, child) shouting "it's a fish!", encouraged by his parents no less, completely spoilt the experience of the starling roost over at Fen Drayton. I could have wrung his b****y neck!

Unfortunately Nigel, your comments ring true regardless of where on the planet one is. Common sense is being replaced with ignorance and stupidity; civility/civilized conduct has turned to incivility. The ...."small minority of overly loud and obviously selfish morons who seem to spoil birding for everyone..." you mention, is growing ever larger sad to say.

Great photos...I see waxwings in my trees every couple of weeks..they seem to travel in flocks of 20 or 30...a few starlings usually hand with them. They land in my juniper trees (Idaho) and eat the berries!

Nigel you have taken the words right out of my mouth, a few weeks ago I was at Leighton Moss and the hide was so noisy it was unbearable. The offenders were a group of "experts" clad top to toe in matching stealth gear outfits bouncing 7d's around and checking on the ID of Teal and Redshank.

More long glass than you see at a photo show. Sad state of affairs but common in all areas of photography these days. Trust me I know Im a wedding tog.

Just do what you do mate your results are stunning. In the end they get fed up with poor resulst and move onto another hobby. We Hope!!

King Cobra
Sadly it's not just bird photography that suffers from the unthinking and uneducated. I have a passion for sound recording and it can be hard work when the lunatics have been let out on day release.
Superb pics by the way and makes me want to get a 600 for my Canon.