This year is flying by, almost Christmas again and I am already fed-up with piped carols in the supermarket, glad I don’t work there!
The seasons are passing on and I nearly missed the main wader passage due to other work commitments and frankly some very crap weather, it seems to have been wet and windy whenever I have been free to head out with the big lenses.
I did get away to the coast though, one of my main target species was Curlew Sandpiper, I have many pictures on file but thus far have never managed to find a really confiding bird that I can shoot from right down in the mud, with it! Part of the problem now is that you can’t go anywhere without there being crowds of people, and amongst them is always another birder with a camera, usually one who makes more noise that a one-man-band in hob-nailed boots! 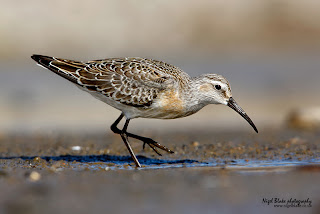 Well I found the bird, a 1st year juvenile with a fine peachy flush of colour to its breast feathers, and after a little while stalking carefully I dropped to my tum and started shooting, soon the bird was used to me enough that I could get closer, however , dashing across the shingle I could see disaster looming, I’d been seen and another camera toting person was heading in my direction at breakneck speed…… fortunately once he was closer I recognized who it was and after a few hand-signals and whispered instructions the chap got down low and moved in slowly, he also waited until I was happy that I had the images I was wanting before joining in, It was so good that there are still a few who respect other peoples ‘finds’ and show some etiquette rather than bulldozing in, generally spooking the bird, leaving no-one with shots! Many thanks, you know who you are! 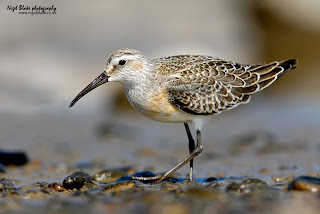 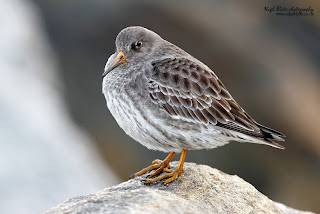 On other days I had to myself a very confiding Purple Sandpiper (above) and an equally tame Golden Plover, it posed for me for about 2 hours....... 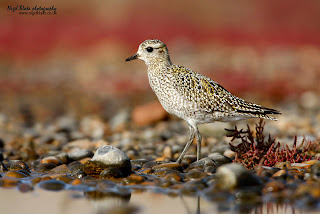 .......and also I caught up with some Sanderling, practicing ballet and running in the surf on the beach at Titchwell. 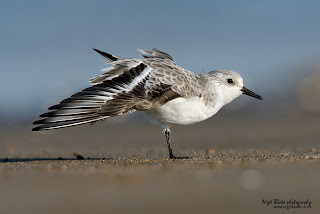 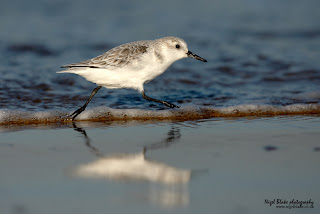 Lots more images on http://www.flickr.com/
Posted by Nigel Blake at 15:06

Beautiful shots, Nigel! The curlew sandpiper is a sight to behold!

Just found your site Nigel, superb photo's coupled with great advice and as for your comments on the behaviour of some photographers and I should add some bird/wildlife watchers, you are absolutely spot on. More thought for others will make every experience a better on and the wellbeing of the birds/animals should always come first. Keep up the good work.